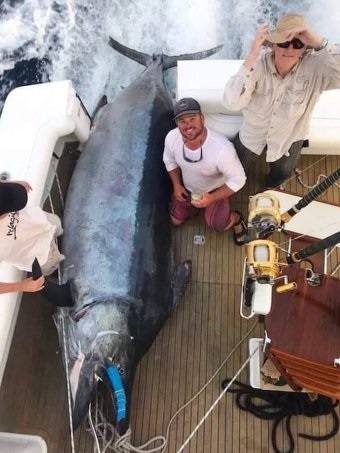 abc.net.au reported first – Fishing groups and experts have defended the actions of anglers who landed a nearly 650 kilogram black marlin off Queensland on Friday, saying the majority of catches tagged and released in Australia survive.

The 649.87kg beast took just two hours to catch, with sport fisherman Rob Crane and his crew deciding to bring it back to shore after witnessing it had died to see whether they had managed to beat the world record of 707kg.

The anglers pointed out the fish was killed during its fight with Mr Crane off Lady Musgrave Island, not on board nor being brought back to shore.

It’s so rare to get the opportunity, or even a bite, but to get it on your boat is a whole other story, it’s pretty awesome.”

The angler estimated the black marlin to be about 15 years old, and is the largest of its kind caught in Australia in over 30 years.

Marine Biologist Sam Williams, who specialises in the study of marlins and fisheries science at the University of Queensland, said the survival rate of fish following release exceeds 90 per cent.

Dr Williams said it was common practice to release fish, and anglers are often avid supporters of keeping them alive for conservation and research.

“As far as game fishers go about catching these marlins, in Australian waters 95 per cent that are caught are tagged and released,” he said.

“Anglers bring them to the boat, they take a lot of care because generally they are actually the most keen to learn as much as they can about these animals.

“They’re out there every day trying to sustainably tag and release them so more can be learnt later.”

Following the catch, images of Mr Crane and his crew with the fish went viral, sparking a furious social media debate over whether it was ethical to target and bring the fish back to shore.

A post drew thousands of comments, many critical of the decision, sharing comments like, “This is such an awful way for that incredible animal to die and for no reason other than human self-righteousness” and “Such a shame, hate that people’s egos are worth more than the life of the animal”.

But Queensland Game Fishing Association vice president Joshua Cox said that clubs and anglers across Australia maintain a strong stance on releasing fish after they are caught.

“[Our club] is predominantly tag and release, and basically all the research that we have on fish species is from the ones that died like this one did, during the fight,” he said.

“It’s not a common occurrence that they die. Even as clubs, we run a point system throughout Queensland and Australia, and you don’t get any points for a killed fish. We are very strong on releasing them.

“It is unfortunate in this case the fish died, but it does need to be brought in and weighed if it was to run for a world record.

“It really is once-in-a-lifetime to get something this size and now can be used for research to figure out where they are spawning and living.”

Dr Williams said the survival rate after tag and release was even higher for larger fish over smaller fish.

“Juvenile fish have a slightly lower survival rate, still around 86 to 88 per cent, but yes a majority of these fish that are being caught are actually surviving,” he said.

“To date there’s been about 65,000 tagged and released in Australian waters alone, that’s quite a number of fish.”

Despite just missing out on the top score, Mr Crane said it was a “once-in-20-lifetimes” catch and one most anglers would only dream of.

“It was our third shot and on the second day of trying, way east of Lady Musgrave Island, we got hooked up to the big one. It was a fair fight,” he said.

Dr Williams said that ordinarily, larger fish caught by professional charter boats off Cairns are able to quickly reel in a fish and tag and release it without having to spend too much time with it, because they are used to doing on a routine basis.

Dr Williams said the catch will be beneficial for studies, and already indicated possible changes in living and spawning behaviours compared to a decade ago.

“To see a marlin this size is quite unusual — particularly where it was,” he said.

“It’s probably in the order of one of the top five or ten black Marlins caught in the world, and the fact it was caught off Lady Musgrave was particularly interesting.

“Hervey Bay is sort of the home of the juvenile black marlins, not particularly the large black marlin, as they use it as sort of a nursery area for their first six months of life.

“If this fish was in spawning condition then it would be quite a nice story, nice to know there’s a secondary spawning area in the south-west Pacific.

“That’s quite remarkable really, they are normally further up north or where the world record is held in Peru.”

It is not yet known what will happen to the large catch, however Mr Crane said he would like to donate it to any interested research groups, to learn more about the living, spawning and travel patterns of black marlins.