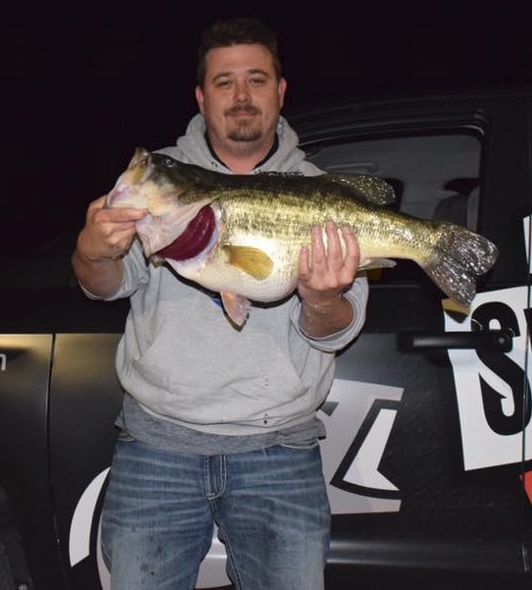 Two largemouth bass over 13 pounds were caught by anglers in Texas over a recent weekend, bringing the total number of “Legacy Class” Toyota ShareLunker entries up to four for the selective breeding program’s 2019 donation season ending March 31. The fish were caught out of the top two ShareLunker producing lakes of 2018 – Lake Fork and Lake Conroe.

“It was a busy weekend for the Toyota ShareLunker program,” said Kyle Brookshear, Toyota ShareLunker Program Coordinator. “I’m not surprised that the top ShareLunker producing lakes of 2018 have also produced two of the three “Legacy Class” bass caught so far this year in Texas public waters. We are thankful to the anglers for loaning the fish to our selective breeding program so that we can continue producing bigger, better bass to stock in Texas lakes.”

Angler Barry Prince of Lindale caught 13.73 pound ShareLunker 579 (pictured to the left) from Lake Fork the evening of March 8 on a shallow diving crankbait in 4.5 feet of water. Prince said this is the first double digit bass he’s ever caught in more than 30 years of fishing.

“I’ve been chasing that fish for years,” Prince said. “Once I realized how big this fish was I looked at my partner and said ‘get the net, it’s a good one!’ It’s still such a surreal feeling, some people fish all their lives and never get to catch a double-digit bass before they die.”

Just two weeks before catching his ShareLunker, Prince said he had a conversation with a friend and local guide and discussed the once in a lifetime question “If you ever caught a 13 pound bass would you donate it to the ShareLunker program?”

“He said “absolutely so,” Prince said. “I’m a big believer in the ShareLunker program and I think it’s great for Texas and the fisheries all over the state.”

Angler Cole Turner of Houston caught ShareLunker 580 (pictured to the right) from Lake Conroe the next evening on March 9. Turner, who fishes at Lake Conroe at least two weekends a month, said he caught the 13.36 pound bass on a Texas-rigged beaver bait in 3 to 4 feet of water.

“About 30 minutes into our trip, my fishing partner and I realized we forgot the net, and I said ‘you know what that means, we are definitely going to need it,” Turner said 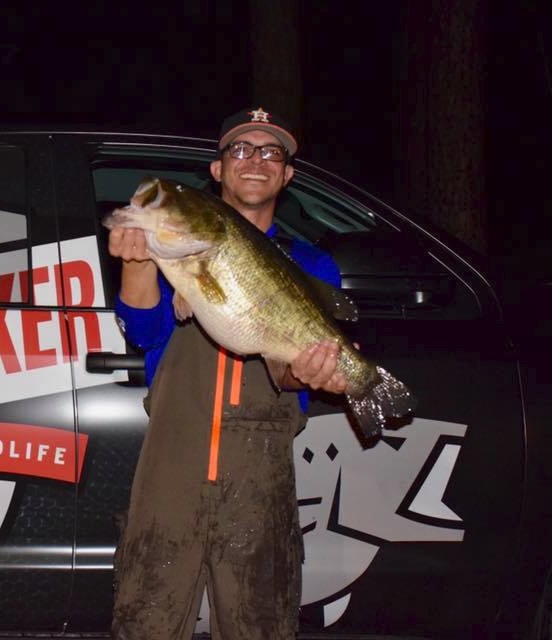 Turner’s prediction turned out to be spot on. After an hour and a half of catching only a catfish and a white bass, he finally got the bite of the lifetime.

“My fishing partner Nathan Dimmitt thought it was a double digit bass when we first saw it break the water. I knew it was big – but I didn’t think it was that big – I was more focused on getting it into the boat since we didn’t have a net,” Turner said. “I would like to give special thanks to him for helping me grab the fish and pull it into the boat.”

“Catching a ShareLunker was a great feeling and a great accomplishment – that is what we all fish for,” Turner said. “I definitely am going to love getting a free replica of the fish but I’m also interested in knowing the history of the bass and giving it a chance to produce more offspring.”

In return for loaning their 13 pound or larger fish to the selective breeding program, Prince and Turner, along with any angler who loans a “Legacy Class” bass to the Toyota ShareLunker program during the spawning period Jan. 1 to March 31, will receive a Toyota ShareLunker Catch Kit containing branded merchandise and fishing tackle items, a 13lb+ Legacy decal, VIP access to awards programming at the Toyota Bassmaster Texas Fest, a replica of their fish, and an entry into the year-end ShareLunker Prize Drawing to win a $5,000 shopping spree and an annual fishing license. These anglers will also be entered into the Legacy Class Prize Drawing for a $5,000 shopping spree and an annual fishing license at the end of the spawning period March 31.

The other “Legacy Class” entry caught from public water in Texas during the 2019 donation season is ShareLunker 577, a 14.57 pound bass caught by angler Zach Sypert from Marine Creek Lake Jan. 27. ShareLunker 578, a 13.79 pound bass caught by pro angler Gary Klein from a private TPWD research lake Feb. 8, was accepted as a donation for the selective breeding program but is not eligible for any prizes because it is a private water entry.