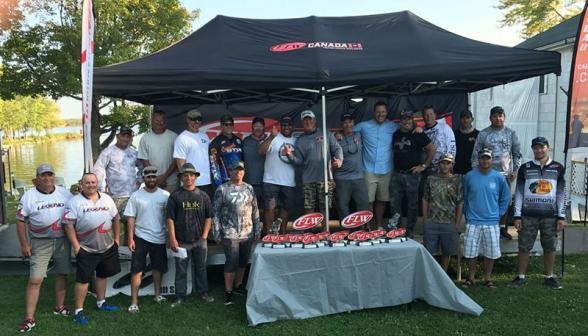 “Canadian bass anglers are among the best in the world and they deserve world-class events in which to showcase their talent,” Fennel said. “We are excited to announce Andrew Pallotta as our new partner in Canada. We are confident that his extensive background in tournaments and sport shows will further elevate the status of FLW Canada tournaments and provide a promotional platform befitting such a talented group of anglers.”

“Our goal is to provide professionally run tournaments that welcome all anglers and provide Canadian citizens with opportunities for advancement that they cannot receive anywhere else,” Pallotta said. “We will start with one major event, the FLW Canada Cup, and grow from there with a focus on providing highly competitive and enjoyable tournaments for the largest number of anglers possible.”

The FLW Canada Cup, scheduled for August 16-18, 2018, on Bay of Quinte (bay only), is open to all anglers. FLW Canada membership is not required to compete in the new FLW Canada tournaments. Additional tournament details will be announced soon. Watch for the relaunch of FLWCanda.com and related social media pages in the next 30 days. In the meantime, all FLW Canada inquiries can be directed to andrew@fishandboatshow.com.

Additional FLW qualifying tournaments in other countries are forthcoming. Watch FLWFishing.com for details on other new international partners.

Named after the founder of Ranger Boats, Forrest L. Wood, FLW introduced its Fishing League Worldwide tagline in 2014 to better reflect its status as the world’s largest tournament fishing organization. In early 2015, FLW expanded its presence on the world stage with the introduction of a sanctioning program allowing international partners to license the iconic brand and run FLW tournaments abroad.

FLW is the world’s largest tournament-fishing organization, providing anglers of all skill levels the opportunity to compete for millions in prize money in 2017 across five tournament circuits. Headquartered in Benton, Kentucky, with offices in Minneapolis, FLW conducts more than 258 bass-fishing tournaments annually across the United States and sanctions tournaments in Canada, China, Mexico, South Africa and South Korea. FLW tournament fishing can be seen on the Emmy-nominated “FLW” television show, broadcast to more than 564 million households worldwide, while FLW Bass Fishing magazine delivers cutting-edge tips from top pros. For more information visit FLWFishing.com and follow FLW at Facebook, Twitter, Instagram, YouTube and Snapchat.