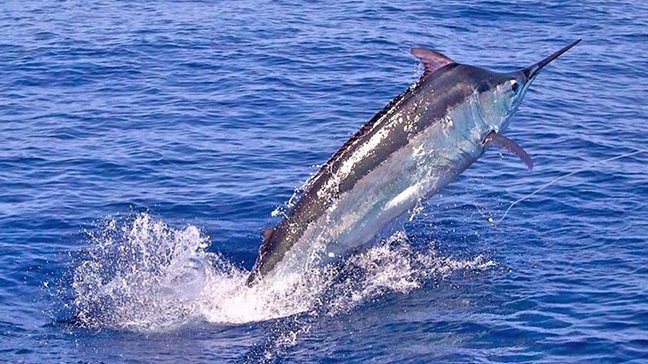 Raymarine and FLIR electronics – Captain Tim Dean has been running Calypso Fishing Adventures in the productive waters between Port Stephens and Cairns, Australia for the past 25 years. “My clients come from all around the world to fish here in Australia, predominantly on the Great Barrier Reef chasing giant black marlin,” he says.

“The technologies FLIR and Raymarine are coming out with are second to none,” says Dean. “Information breeds confidence, and that’s what it takes to catch the biggest fish that swims.”

Dean relies on FLIR sensing technologies like Open Array radar with Bird Mode, ClearCruise AR and thermal imaging to make sense of the complex topside environment around Calypso. All the information coming in is intuitively and clearly displayed in any manner as Dean chooses on one or more of his four Axiom Pro and Axiom XL multifunction displays, powered by the smart LightHouse 3 operating system. He can even add a drone to his information-gathering arsenal, and control operation and view its camera directly on his MFD using Axiom UAV.

“With the new HD radar I’m running, the open array, I can mark flocks of birds up to six miles out,” Dean says. “You get on those birds and you’ll usually find a whale shark or an aggregation of tuna, hence the marlin.”

Dean gets Calypso where it needs to be quickly and efficiently with Raymarine Evolution autopilot. “I can plot a route from here to Cairns with ease,” he says. “I just grab a cursor and hold it down and within a couple minutes I’ve got a course plotted for a thousand nautical miles. I put my data card on the navigation screen, which will tell me distance to waypoint… how long I’ve got to go. It’ll replay downstairs so the crew can see where I’m at and what time we’re going to get in. They can tune up their works so when we hit the docks we’re just throwing ropes on and we’re good to go.”

Calypso is also outfitted with FLIR thermal cameras, which provide detailed views of the vessel’s surroundings, day or night, and display those views on Axiom. “With the FLIR camera we have, coming into a marina at night, you’ll miss nothing. It’s the best thing I’ve ever put on my boat,” Dean says. 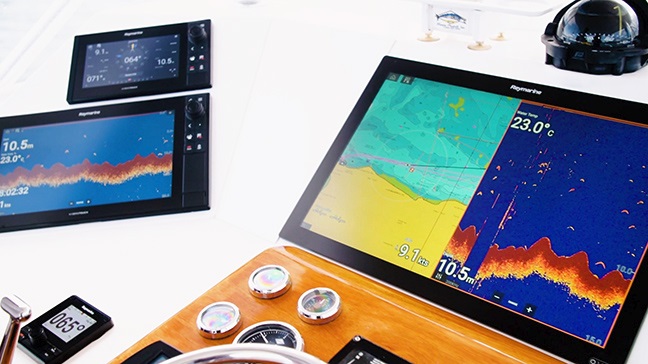 “CHIRP equipment is a game changer, especially for that inshore shallow water… you’re marking individual fish; the stuff’s that good,” he says. “You can count how many fish are swimming around a reef. I’m running four screens up there now, so I’ve got it pretty well covered. I’ll run low-frequency (50 kHz) CHIRP, then I’ll run my chartplotter on my big screen next to my 200 kHz (high-frequency CHIRP). At the touch of the screen I can move them anywhere I want. There’s nothing that can swim under, around, beside, behind this boat we won’t know it’s there. When a fish rolls past the sounder, I just touch the screen and it pops up on my GPS where that fish is. Even if I miss that fish, I can scroll back through the data and through the screen on the sounder… I could have run over a fish five minutes ago and I can touch his position and it will tell me where he was.”

Captain Tim is also an enthusiastic user of Raymarine RealVision 3D technology. “The RealVision 3D is something I never thought I’d see,” he says. “I had heard about this sort of technology, and we’ve been running it pretty solid on the inshore reefs and it just self-maps each time you run over it. It’s building more data into the system and once you get your head around how it’s working, it’s the ultimate game changer.”

“People often ask, what’s the one thing you need to catch the biggest fish that swims?” says Dean.  “The answer should be confidence. With Raymarine, I’m confident every time I leave the dock.”

For more information on the Raymarine electronics, visit http://www.raymarine.com.

For more information on the FLIR marine products, visit https://www.flir.com/applications/marine/.

Learn more about Captain Tim and the Calypso Fishing Adventures team at marlinfishingaustralia.com, or follow his adventures on social media at @calypsofishing