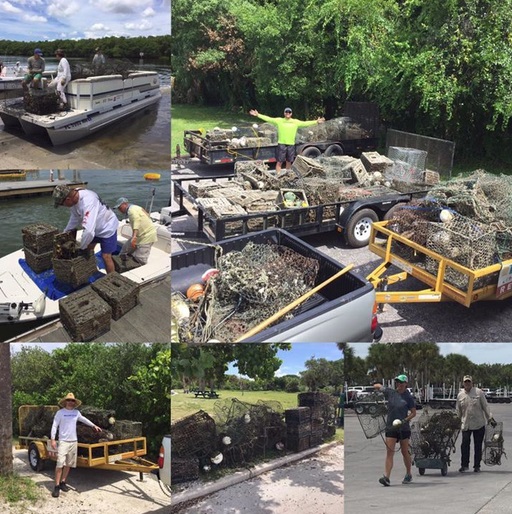 Tampa Bay Watch had a very successful derelict crab trap removal project on Saturday, July 15 in which 228 traps were removed from Tampa Bay due Florida Fish and Wildlife Conservation Commission’s 10-day regional closure of blue crab fishing. Over 100 volunteers on 35 boats participated at six locations around the bay. 68 traps were collected at Belleair Causeway, 78 at Fort De Soto Park, 30 at Cockroach Bay, 27 at Demens Landing, 12 at Courtney Campbell Causeway and 13 at Williams Park!

FWC requires a regional closed season for the blue crab fishery to help facilitate efforts to identify and retrieve lost and abandoned blue crab traps in state waters of Florida. The local closure is from July 10-19 and extends out to three miles offshore and apply to both commercial and recreational free standing traps (blue crab traps attached to private property (i.e. docks) are excluded from the closure). All commercial and recreational traps left in state waters during the ten day closure will be considered derelict and can be removed. It is important to note that even though the fishery will be closed, not just anybody can remove a trap. Anyone interested in being involved must be a part of an organized effort that has been authorized by FWC. Three regional, 10-day blue crab trap closures take place in designated areas in Florida in odd-numbered years, and three other closures occur in even-numbered years.

Derelict and abandoned crab traps in the waters are a problem for several reasons: they continue to ghost fish (fishing that continues despite the inactivity of the trap) killing not only the crabs but several other recreationally and commercially important species; they pose a navigational hazard to boaters; they can cause damage to valuable and sensitive habitats such as seagrass or natural hardbottom environments. Manatees, dolphins and sea turtles can also become entangled in the trap line causing injury or death.

“This event is great because it gets community volunteers involved in helping to preserve and protect the bay by removing debris and keeping marine life from needlessly getting caught and killed in abandoned traps,” said Serra Herndon, Habitat Restoration Director for Tampa Bay Watch.

It is estimated that there are hundreds of derelict crab traps that have been accumulating for decades in Tampa Bay. Each year, Tampa Bay Watch performs surveys to identify derelict traps and conducts clean-ups to remove them. Having conducted 35 crab trap removals since May 2004, Tampa Bay Watch has successfully removed 1,887 traps from the waters of Tampa Bay.

Tampa Bay Watch partnered with ReelCycle for this important crab trap removal event. ReelCycle (www.reelcycle.org) is a 501(c)(3) entity that focuses on waste reduction and sound management practices for the fishing industry. Devin Sanderson, ReelCycle’s Founder and President, said the following about this event: “Each year, hundreds of tons of derelict gear is discarded in landfills or illegally dumped, which can result in ‘ghost fishing’ or ‘ghost traps’. Ghost traps that are lost or abandoned continue to catch crabs and fish in large numbers, threaten stocks, and damage the marine environment. ReelCycle works to create recycling programs for undesirable gear, from collection through disposal, providing both conservation and socioeconomic benefits. ReelCycle will take the crab traps collected during the project and deliver the traps to a metal recycling who will process and melt down the traps to ultimately reuse into a another product. The non-metallic material collected such as stone crab traps, ropes, and floats will be incinerated and converted into energy though a waste-to-energy program. ReelCycle will be able to upcycle these traps into a renewable resource as opposed to being discarded in a landfill.”

If you would like more information regarding the FWC’s trap-retrieval program, blue crab trap closure dates, or regulations, that info is available online at MyFWC.com/Rules (click on “Fishing – Saltwater”). You can also contact FWC’s trap-retrieval coordinator, Pamela Gruver, at 850-487-0554.

Tampa Bay Watch is a nonprofit 501 (c)(3) stewardship program dedicated exclusively to the charitable and scientific purpose of protecting and restoring the marine and wetland environments of the Tampa Bay estuary encompassing over 400 square miles of open water and 2,300 square miles of highly- developed watershed. Tampa Bay Watch involves more than 10,000 youth and adult volunteers each year in hands on habitat restoration projects. For more information, visit www.tampabaywatch.org, or call 727-867-8166.